In Search of Justice 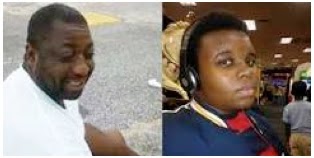 There have been reams of paper devoted to the murders and life stories of these two black men—well, Brown was actually only on the cusp of adulthood—so I would rather leave you to whatever memories, thoughts, feelings, meditations, and actions these needless deaths called upon you to confront. Each of us has our own tale of where we were the day each of these people were struck down in altercations with cops, one of whom choked Garner to death, and one who shot Brown. Neither of these men’s killers had formal charges or indictments brought against them. Quite naturally, this led their communities—and in fact the whole country—to come together in order to lobby, demonstrate, march, rally, chant, cry, and act out—though vandalizing private property clearly has nothing to do with justice, and is just a reflection of immaturity, greed, and extremely poor judgment.

The quality of protest, like the quality of life, is not determined by the circumstance, though it might be generated by them. What I mean is that there are many ways to express the grief, outrage, rage, horror, and politics around the current rash of well observed, filmed, and highly publicized killings of Black men by the police. 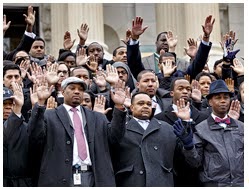 On Thursday afternoon, December 11th, dozens of congressional staffers walked out onto the steps of the nation’s Capital to protest the recent and ridiculous, misdirected, and inexcusable decisions by the two grand juries that failed to indict the officers that killed Eric Garner and Michael Brown. The result was an incredible display of solidarity, with staffers raising their hands in the air to invoke Brown's "Hands up, don't shoot!" image. The following are some of my other favorite photographs of peaceful protests. 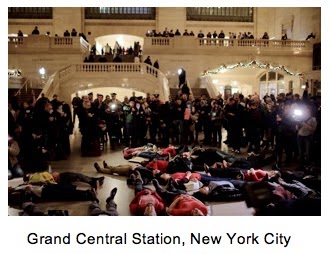 While I’m on the subject of the police, I thought I’d mention a conversation that was videoed by a woman on her cell phone (click here to watch) of a policeman hassling her during an arrest stop. In the midst of this all, the cop tells her, “You’re a dumb bitch!” All I could think was, “You’re calling her dumb while you are screaming, cursing and battering her as she’s capturing you on her cell phone?” Finally he grabbed her phone and tried unsuccessfully to erase her evidence. I guess he wasn’t cyber-currant enough to know that once it’s there, it’s there.  So I ask you officer, does it seem so smart to treat another human being like that?

Please note that yes, there was violence by the police, but also violent rioters who burned cop cars, and looted, robbed, and destroyed the property community residents’ families depend on. And let’s not forget how dangerous it is for the police. On Saturday December 20th, as two police officers, Wenjian Liu and Rafael Ramos, sat in their parked patrol car in the Bedford Stuyvesant neighborhood in Brooklyn, where they were assigned for the day, they were shot by Baltimore resident Ismaaiyl Brinsley, a gunman on a mission who had shot his girlfriend before heading to New York. He walked up to the police car and shot each officer directly in the head. Both officers died shortly thereafter. Later, Brinsley fatally shot himself in a subway station. This is a sad state of affairs, and my heart goes out to the families of the policeman, and to the family of their murderer.

I pray that all this violence stops on both sides of the guns.

What We Can Do: