Which part of “Liberty and Justice for All” do President Obama and the Senate not understand? Let me follow that by saying that I do not believe in war. War settles nothing. War replaces reason and possibility with death and destruction. That said, I also believe in the right of those who believe that war can provide solutions and want to fight in such wars, to do so. I am shocked that the President does not seem to understand that Don’t Ask Don’t Tell is not just an affront to LGBT individuals wanting to serve in the military; it is an affront to Democracy. Do Senators not see that it is profane, anti-American and an insult to the Constitution? The government has no right to force citizens to lie in order to take the oath required to serve their country, particularly while telling a lie under oath in court is considered perjury. But then reality has often been lost in the frenzy surrounding certain human rights issues and preventing certain communities from exercising their rights. Dr. Amy Lehman, a Chicago doctor who had planned to become a thoracic surgeon, made a radical career detour that has opened her heart and is displayed in the glorious tattoo of Lake Tanganyika that occupies her entire back. Meeting Amy was one of those small-world events. My daughter Julie is an architect in Chicago, where I grew up. Amy wanted to rehab her house, had seen Julie’s work, and set up an appointment with her. Amy's mother came along and suddenly asked Julie if she was my daughter. We don’t look alike, but our vocal qualities and gestures are very similar. As it turns out, we were best friends in high school!

In 2008 Amy co-founded a nonprofit organization, the Lake Tanganyika Floating Health Clinic (LTFHC), with her close friend of twenty years, Dr. Alwyn T. Andrew Mziray whom she met and knew in Chicago, but who was originally from Tanzania, where they traveled together in 2007. He had something to show her and a need to fill. Their mission became to challenge and change access to healthcare and education in villages in the parts of Democratic Republic of Congo, Tanzania, Burundi and Zambia that surrounded Lake Tanganyika. These communities were remote and devoid of help for millions of isolated residents. 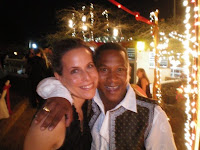 Dr. Mziray died quite suddenly at 39, while in Zanzibar. Michael Runyon, MD, of the Dept. of Emergency Medicine at the Heineman Foundation where Mziray had worked said of him, “Dr. Mziray was a tireless advocate for the development of a sustainable emergency medicine infrastructure in Tanzania. His energy and enthusiasm were inspiring and his dedication to improving the quality of emergency medical care was unwavering."

Delivering health care to these remote communities had become Amy’s passion. She saw that the only way to deliver vital medical care was the lake, and that because of how isolated the area is it will have to be built on site. At present she rents boats from the locals to deliver bed nets along the lake to prevent malaria which is a primary killer of villagers. Amy writes, “We’ve touched around 300,000 people so far in Lake Tanganyika Basin/Great Lakes region in Central Africa. One good example is all our malaria work, including the supply of bed nets and training community health workers. We're also installing radios in several health centers along the lake which are in communications black spots. We’ve made a huge difference for such a tiny organization with very little funding.” Amy’s goal is to equip a floating hospital that can bring medical care to some 3 million people. She is committed and passionate and does whatever she can to realize the Lake Tanganyika Floating Health Clinic: raising funds, commissioning a local shipbuilder, cajoling officials. I know that Amy will reach her goal, and of course you can help. Please check the web site: http://floatingclinic.org 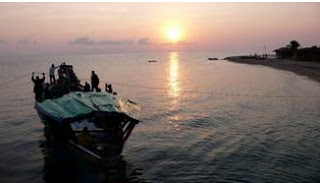 Damien Drake is collaborating with the Oscar Award-winning documentary team Fisher Stevens (who is my son) and Mark Monroe, in partnership with East Pleasant Pictures, will make a feature length documentary about the Lake Tanganyika Floating Health Clinic. Please enjoy the trailer: http://floatingclinic.org/documentary.
229 comments

Art is a fantastic tool through which to express our activist spirits. Art can transport us from the mundane to the sublime and from the ordinary to the fantastic like nothing else. Our creativity is our personal force for creation. We can breathe life into concepts and content into form. Art gives us the vehicle that lets us raise the causes we are passionate about above the fray and allows us to embrace them, understand them, and re-imagine them. I see no split between art and activism.