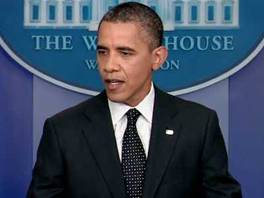 Our President struck the perfect tone as he delivered a major address to the nation about Hurricane Sandy. After a briefing with the heads of the appropriate agencies he moved to facilitate the rapid flow of aid to the states that suffered storm damage. He declared New Jersey, New York and Connecticut “major disaster areas.” In a conference call with reporters, the Federal Emergency Management Agency (FEMA) Director Craig Fugate called the president's decision to do so while the storm was in progress “extraordinary.” The declaration allowed business and home owners to apply directly for aid. He also issued "emergency declarations" for several other states that allowed FEMA to help oversee their relief efforts and make those states eligible for federal support. He warned, "This is a serious storm. We are certain that this is going to be a slow moving process...and millions of people are going to be affected." He also noted that, "The public should anticipate that there's going to be a lot of power outages" and, most importantly, that those in Sandy's path should "listen to what local officials say. When they tell you to evacuate, evacuate....Don't wait, don't hesitate." Okay, let me just say that he didn't mean me. But I’m going to vote for him. Has he done everything the way I would have wished? No. Does he walk on water? No. But then again, I am not privy to all of the information that flows to him. I don’t know what evil lurks in the hearts of certain men and women. As it is, I do my share of second guessing without a full deck. And he certainly has accomplished some major things. He has: not started any new wars, has ended one and is winding down another; killed Osama, which Bush didn’t do despite starting those wars; saved the auto industry; propped up the banks; passed a comprehensive health care program that has already made life better for many Americans. And he's done all of this despite the Tea Party (whose members must even now hate seeing his black face addressing them from the White House) and the aspirations of Mitch McConnell and his coven to make him a one term president.

What You Can Do: