What We Do Pays Off

I thought it would be a good idea to let you know that thanks to the wonderful world of the Internet Activism reaches across borders, cultures, communities and issues to make significant change, to influence, to raise awareness, and raise funds for projects, organization, ideas and individuals. The following are examples of the things we the people have influenced and accomplished with our participation, our keyboards, our letters and our passion. 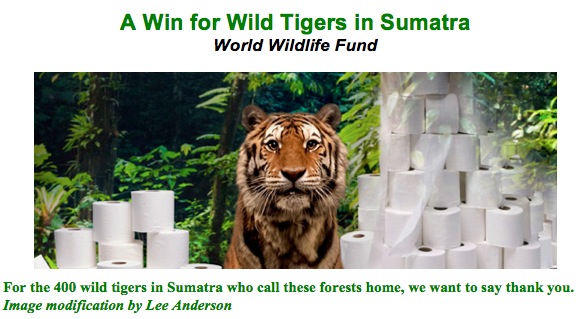 Earlier this year, you helped us by asking retailers to remove Paseo toilet paper from their grocery store shelves because it was known to be made from fiber supplied by Asia Pulp & Paper (APP), a company causing devastating rain forest destruction in Sumatra.

We have great news: Paseo has been discontinued and soon will no longer be found on store shelves across the U.S.!

More recently, Dollar General, one of the largest buyers of private label tissue in the U.S., also confirmed to WWF that it has made a commitment to stop sourcing both paper towels and tissue from Sumatra's forests for its private label brands, recognizing that they can have a positive impact in saving this critical tiger, elephant and orangutan habitat through their purchasing decisions.

There is more to do, and WWF continues work to protect the lush rain forests of Sumatra that suffer from what may be the world's fastest rate of deforestation.

Nate C. Hindman wrote an article about the iconic St. Marks Books for Huffington Post. “At a rally last fall in New York’s East Village celebrating the end of a long battle between the 35-year old St. Mark’s Bookshop and its landlord, Cooper Union, Manhattan Borough President Scott M. Stringer praised the school's decision to reduce the store’s rent, allowing St. Mark's to fend off foreclosure. He told crowds that he was confident the deal would help keep the beloved shop open for “another 35 years!” 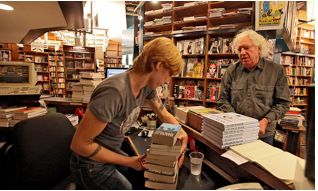 Stringer was wrong. For St. Mark’s the rent once again became too high and though they had good clientele which ranged over time from Susan Sontag, Annie Leibovitz, Allen Ginsberg, Philip Glass, and William Burroughs, to college students to tourists, to neighbors who popped in to browse and spend what they could. They tried one thing after another and landed on crowdfunding, a fundraising tool that allows entrepreneurs to collect small sums of money from many people over the Internet to support efforts initiated by other people or organizations. Crowdfunding has been a boon to St. Marks Books. Their current location is 31 Third Avenue, still in the same wonderful, very New York neighborhood. I received the following from them when I signed and circulated a petition and wrote a letter to friends asking them to go there and shop, shop, shop. We can always help.

Dear Friends of the Bookshop,
We wanted to take a second to thank you from the bottom of our hearts for your generosity, but more importantly for your support. By pledging on our project you have not only helped us financially, but have shown the world that bookstores still matter. As of this afternoon we have surpassed our goal of $23,000 on our Lucky Ant campaign! [note: the campaign has since ended]. This is not the end of the road for us. The move could cost upwards of $100,000 in total, but this first big chunk at least guarantees that we will keep fighting because you have shown everyone that there is a reason to.
On Lucky Ant, we can surpass our goal. We know we probably won't hit $100,000, but with a little more than 3 days left we'd like to see how far we can get. Every little bit helps (we don't ever want to have to do this again)! So, if you've procrastinated on pledging, the campaign is still active . If you have already pledged or can't, thank you again and please take a second to share the link one last time. Thank you again for your amazing support - you guys are awesome!...
St. Marks Bookshop

Bob Contant, partner/owner said “Amazon didn’t suddenly appear in 2008,” and Mr. McCoy, 67, said, “but our sales fell off then. The store is a great browsing experience. It’s a curated thing. I don’t think you can get that online.”

Thomas Haynesworth addressed an overflow crowd, at the Petersburg Virginia Good Shepherd Baptist Church’s Re-entry Forum, sponsored by the Petersburg Sheriff’s office. Haynesworth has devoted his life to the emotional health and well-being of others who face the kind of issues he faced. He explains how serving 27 years for a wrongful conviction and his faith fueled his passion to help others.

On a Sunday morning in February 1984, Thomas Haynesworth’s mother asked her 18 year old son to go to the Trio Supermarket to pick up some bread and sweet potatoes for their Sunday dinner, but he never completed his errand. As he walked along he was stopped by the police for no apparent reason, who then proceeded to arrest him on suspicion of rape. There had been a series of five assaults and rapes in his neighborhood, his color was alleged to be that of the perpetrator, and he was falsely accused by the victim who miss-identified him. He was tried for four of the rapes, convicted of three of them and sentenced to 84 years in prison.

At no time did Mr. Haynesworth ever admit to the rapes though the evidence and witness statements argued with his protestations No one believed him, though a man named Leon Davis, a known serial rapist aka the Black Ninja, had been charged for other rapes along the same time line. Haynesworth’s fight for freedom finally took a turn in 2009, when the state’s department of forensic evidence tested the DNA from the first rape as part of a broad review of old case files. Mr. Haynesworth was paroled, but had limitations. At that point the Innocence Project, a national litigation and public policy organization dedicated to exonerating wrongfully convicted individuals through DNA testing and reforming the criminal justice system stepped up for Haynesworth. The case became a public affair, circulating petitions and raising an outcry as the Innocence Project worked until the now 46-year-old Haynesworth was completely exonerated all charges.

Haynesworth said “There are a lot of people behind the scenes who believed in me. Twenty-seven years, I never gave up. I kept pushing. I ain’t give up hope. I am very happy. Me and my family can finally put this behind us, and I can go on with my life. And I can finally vote.”