Vice President Biden Came Loaded for Bear and with Facts 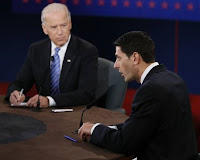 I found the Vice Presidential debates to be far more to my liking than the Presidential back-and-forth. I loved that Joe Biden was fearless, and that finally, finally someone called both Ryan and Romney on their bold-faced lies and wishful thinking. Okay, I could have lived without Biden's grinning, gloating, and grimacing while Ryan was painting himself into corner after corner. It made me wonder what part of Al Gore's grinning-gloating-grimacing or the fall-out from it (thanks to the rabid press and talking heads), he had missed. He fared better than Gore when it came to the press, though I must admit I never turn on FOX or right wing radio. I listened to Rush once, but I'm too delicate a creature to subject myself to that kind of abuse more than once.

I think that he pretty much made up for President Obama's semi-comatose performance. He even confronted Ryan on things that were left to float in the air after the Presidential debate. There was a moment that stands out in my memory: the Malarkey Moment. Martha Raddatz of ABC News was the Moderator. She was centered, grounded, and very good at keeping things moving in a timely manner. She hit the ground running with question one, which was about the attack on the U.S. consulate in Libya. She shot to Ryan, who had won the coin toss. He launched into a spiel about how it was all the fault of the administration and repeated Romney's ill-timed, ill-mannered and ill-considered attack on the President--which came before anyone really knew what had happened--to which, after a kind of palsey walsey exchange between the two candidates about the word, Biden simply called what Ryan had said, "with all due respect, a bunch of malarkey..." and then proceeded to shred Ryan's every lie and every word. He may have taken a liberty or two with himself in the process, but it was service to a good cause. I'll quote him here so in case you missed the debate, you'll get the idea:

“Number one, I will be very specific, number one, this lecture on embassy security -- ­­ the congressman here cut embassy security in his budget by $300 million below what we asked for, number one. So much for the embassy security piece.
“Number two, Governor Romney, before he knew the facts, before he even knew that our ambassador was killed, he was out making a political statement which was panned by the media around the world. And this talk about this, ­­this weakness. I don't understand what my friend's talking about here.”

Also, he brought up what the President had failed to: that great old 47 percent remark that Romney made to a group of fellow rich guys that was secretly recorded for posterity. Vice President Biden had no kind words for Romney's excuses and flashed a genuine smile at Ryan as he looked him in the eyes and said, "The idea,­­ if you heard that ­­little soliloquy on 47 percent and you think he just made a mistake, then I think you're ­­--­­ I think ­­I got a bridge to sell you.” And so it went, point for point.