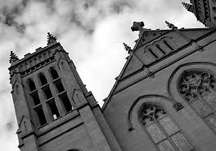 It seems that Michelle Bachmann has never heard of the separation of church and state that Thomas Jefferson introduced as a "wall of separation between church and state," and which was embraced by our Founding Fathers because they understood that the freedom to worship as one chooses was indeed an important freedom. Bachmann has a slightly different take on say, the Declaration of Independence, which she uses, along with Thomas Jefferson, to justify her positions. For instance, she uses the latter part of, "We hold these truths to be self-evident, that all men are created equal, that they are endowed by their Creator with certain unalienable rights, that among these are life, liberty and the pursuit of happiness," to promote her anti-choice position, while ignoring the word "all" when speaking of equality when it comes to gays and Lesbians.

She likes to act as God’s spokesperson when it suits her political ends. She is on record as saying, "I don’t know how much God has to do to get the attention of the politicians. We’ve had an earthquake; we’ve had a hurricane. He said, 'Are you going to start listening to me here?' Listen to the American people, because the American people are roaring right now. They know government is on a morbid obesity diet and we’ve got to rein in the spending." God said that? Given Bachmann’s quite obvious intellect deficit, I looked for a kind way to think about her claim to know what God wants. Aha! Perhaps it’s the fault of her attendance at Oral Roberts University, or might she be a fan of the cult of the old time televangelists; the Pat Robertson, Jerry Falwell schools of religion?
I know that this is the land of the free and the home of the brave, but it is also the home of the frightened, narrow-minded, and sometimes, let’s face it, the not-so-bright. And it is the land where all of us are free to use the airwaves and cyberspace to blame natural disasters on liberals, gays, or whoever the enemy du jour may be. But let’s be clear, Bachmann either fails to understand the word "separation" in "Separation of Church & State," or she pretends not to, in which case she is guilty of blasphemy. I on the other hand, feel absolved of all fault because when her "people" were asked about the above comments, they claimed that she was just kidding when she quoted God. Really? Just kidding?  Well, maybe she simply forgot the part of the Bible, which she just loves to thump, that says, "Thou shalt not take the name of thy Lord in vain."